Most walkers on the coast path probably do not take much notice of The Hermitage, nestled some way back from the shore at Welcombe Mouth in Devon.  They are, perhaps, more interested in reaching the border with Cornwall, less than half a mile to the west. Indeed, the Hermitage, situated in the far west of the north Devon coast, is probably the last building in Devon they will see.

This isolated house was built in the late nineteenth century. It was originally used as a retreat for priests from the Brompton Oratory in London, hence the name. It is probably not the sort of place that would be associated with heavy metal music.

However, it was this farmhouse that the band Deep Purple chose to rent in 1970, in order to work on their fifth studio album, Fireball.

For Deep Purple, this was the start of probably their most creative period. Deep Purple In Rock had been released in June, 1970, and work began on Fireball in September. Having started work on the album in London, the band (Ian Gillan, Roger Glover, Ian Paice, Jon Lord, and Ritchie Blackmore) relocated themselves to the Hermitage in the middle of December.

Several songs from the album are thought to have been written and first played at the Hermitage. Roger Glover later confirmed that the song Strange Kind of Woman (bizarrely omitted from the album but released as a single) was also written here. He describes the period at The Hermitage as

As well as the seances, and occasional violence, the band also spent much time at the local pub, The Welcombe Inn which, sadly, has since closed.

Welcombe Mouth receives fewer visitors than many destinations on this stretch of coast. Lying midway between Hartland Quay and Bude, this is a stormy coastline, with great cliff walking in both directions. Welcombe Mouth has a small car-park, accessible at the end of a long and narrow track , and a pebble beach (below).

A short walk across the cliff to the south is Marsland Mouth, into which flows Marsland Water, which marks the northern boundary between Devon and Cornwall. 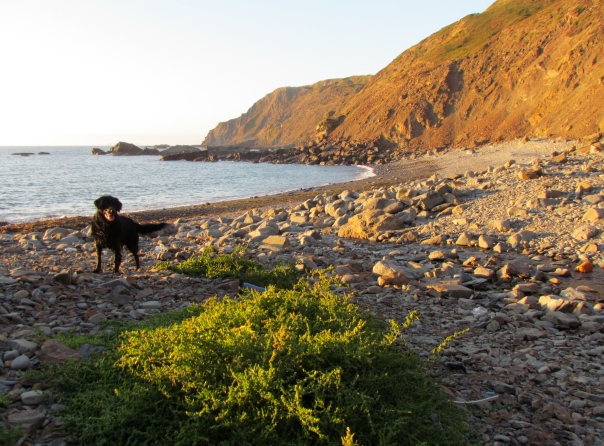 As well as bracing cliff walks, there are plenty of inland footpaths. The steeply wooded Marsland Valley behind Marsland Mouth has many miles of interesting paths.

A couple of miles further along the cliffs to the south is Morwenstow, notable for its connection with the eccentric Parson Hawker. The hamlet also boasts the Rectory Farm tearooms and the Bush Inn, both highly recommended and dog friendly.

Welcombe is signposted west from the main A39 (Atlantic Highway) about six miles south of Clovelly, and four miles north of Kilkhampton. Welcombe Mouth is about four miles from the main road.

1 thought on “The Hermitage”