What is your earliest memory of the countryside?

For some, these early memories can be life-changing. As a boy of six or seven, I remember coming across an old stone cross while walking through fields near my home. I went back to it several times. I found out that it was an old Celtic cross, many hundreds of years old. Forty years on, I can still recall the sense of wonder at being able to touch something that was handled and carved by someone so distant from me in time. They may even have walked along the same footpath as me!

Later, aged about sixteen, a friend and I walked the South West coast path. The beauty was spellbinding and, for me, the geology of the landscape, and the history sprinkled upon it, was fascinating.  I’ve really never looked back.

The better-looking one in that photo is Midge. Midge is a four-year-old labrador/golden retriever cross. We’ve been companions since 2009. In August, 2010, Midge became probably the youngest dog ever to complete a walk from John o’ Groats to Land’s End, completing the 1400-mile journey with me in eight weeks. A year later, she achieved the not-insignificant feat of climbing all the Wainwright fells in the Lake District – 214 mountains – in 21 days. As well as walking, Midge enjoys camping, agility, retrieving, and anything to do with water.

Hopefully, in these pages, we can share some of the joy of walking in this fine country, and maybe share some of our favourite places . . . 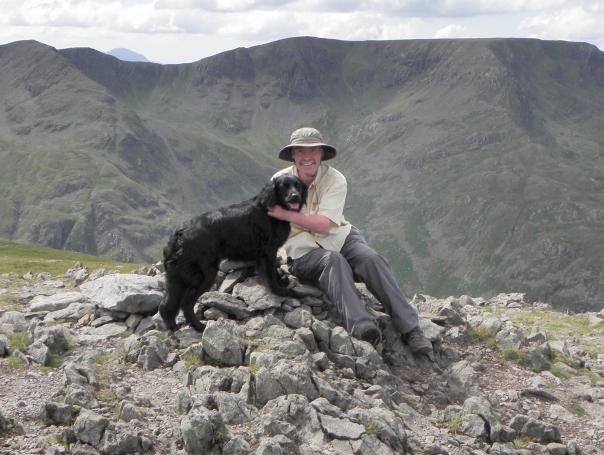 *For those who wonder about such things, both of the photographs above were taken in the English Lake District: the first on Pike o’ Blisco, and the second on St Sunday Crag, with Dollywaggon Pike, High Crag, and Nethermost Pike as the backdrop.