Ribblehead Viaduct carries the Settle-Carlisle railway across the upper Ribble Valley. It is 400 metres long, and 32 metres high at its highest point. It consists of 24 arches, each 14 metres wide. 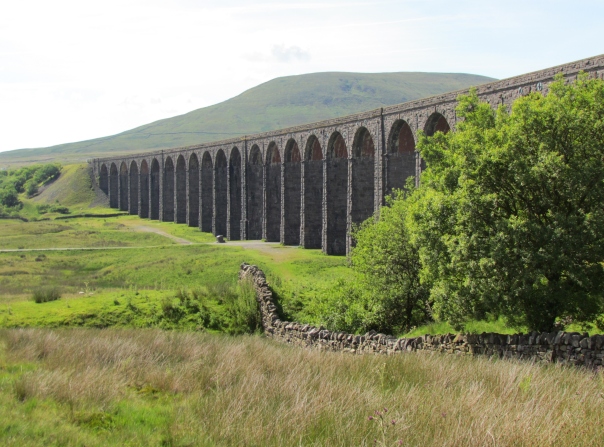 Hundreds of navvies lost their lives in the original building of the Settle-Carlisle railway. In St Leonard’s Church, in nearby Chapel-le-Dale, there are two memorials to them, one contemporary and one more modern: 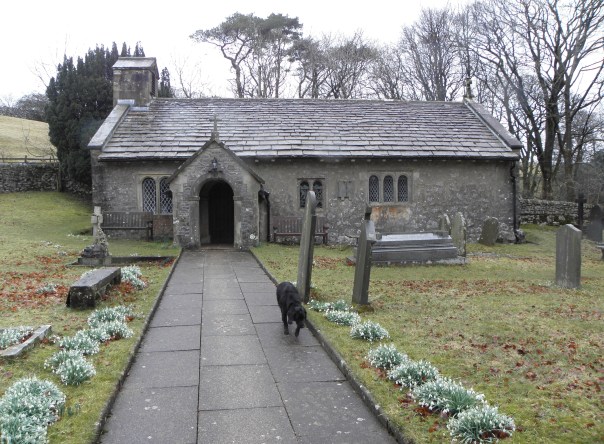 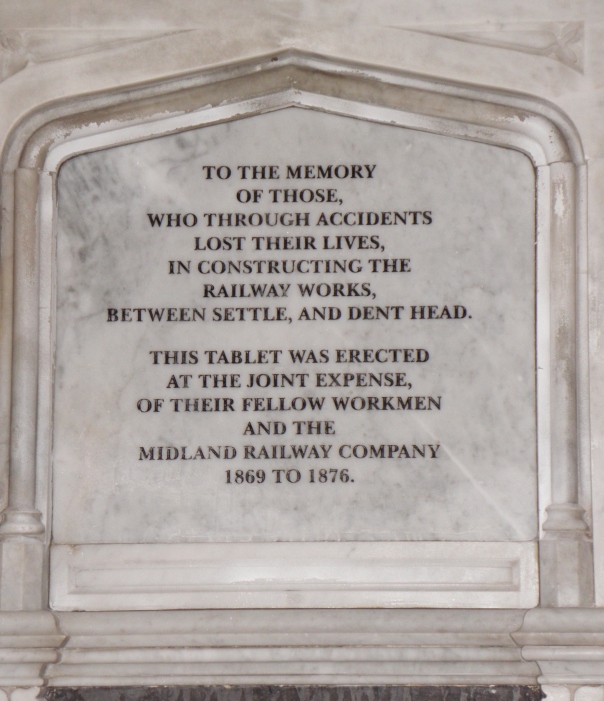 The viaduct is a magnificent structure, probably the most impressive example of engineering on the entire Settle-Carlisle line.

The third of the Yorkshire Three Peaks, Ingleborough, is also visible from the arches of the viaduct:

Even the first of the Peaks, Pen-y-ghent, can be seen in the distance:

The Station Inn is situated close to the viaduct, with its beer garden providing splendid views of Ribblehead and Whernside:

Ribblehead Station is also worth a visit, as it has been restored to its original Victorian state, and houses an exhibition about the history of the line.

There are numerous walks in the area. Two favourites involve a circular including an ascent of Ingleborough, either returning via Chapel-le-Dale (11 miles) or Ingleton (14 miles) Or, for a greater challenge, there is the Yorkshire Three Peaks!

Ribblehead viaduct lies six miles north-east of Ingleton, along the B6255. It is about 20 miles east of the M6 at Junction 36.

Ingleborough is the second highest hill in the Yorkshire Dales, and one of the Yorkshire Three Peaks. it has a distinctive appearance, consisting of horizontal layers of limestone, interspersed with gritstone.

These layers of limestone were laid down in the Carboniferous period (340 – 300 million years ago), when Yorkshire was covered with a warm and shallow sea. The limestone consists of the fossilised remains of tiny sea-creatures whose skeletal remains sank to the bottom of this sea. When the climate cooled, as happened a couple of times during the Carboniferous period, sea levels fell, and the area became delta-like, allowing rivers to cover the limestone with sandstone and gritstone. Erosion of the different types of stone has occurred at different speeds, giving the step-like appearance to the hill.

Ingleborough has an iconic profile, when viewed from nearby Whernside or from Ribblehead.

It is most usually climbed from Ingleton (4 miles), Clapham (5½ miles), or Chapel-le-Dale (3 miles). 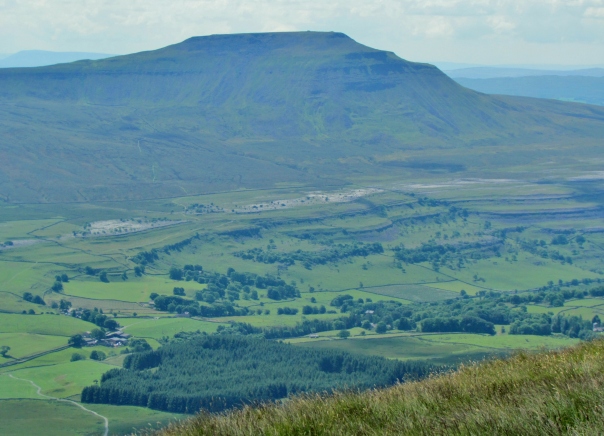 Whernside is the highest hill in North Yorkshire, and lies on the border with Cumbria. It is also one of the Yorkshire Three Peaks (usually the second to be walked).

It is most commonly ascended from Ribblehead Viaduct, which lies 2½ miles to the south-west.

In common with many limestone hills in this area, the summit of Whernside consists of a long plateau, running from north to south.

There are excellent views towards the Lakeland hills, and the west coast. On a clear day, with binoculars, Blackpool Tower can be seen. Nearby, there is an excellent view of Ingleborough.

The usual route of the Three Peaks would see Whernside ascended from Ribblehead, and descended south to Bruntscar and Chapel-le-Dale. The ascent from Ribblehead is about six miles, while from Chapel-le-Dale the ascent is about four miles. A circular route linking the two routes via Haws Gill Wheel would provide a splendid ten-mile walk, with refreshments available at the Station Inn at Ribblehead and the Old Hill Inn at Chapel-le-Dale.

As Whernside is situated within access land, it is possible to ascend and descend by numerous smaller paths.

Pen-y-ghent is frequently walked for two reasons: it is one of the Three Peaks of Yorkshire (usually the first to be climbed), and it lies on the Pennine Way. It’s distinct profile makes it easily recognisable from a distance. 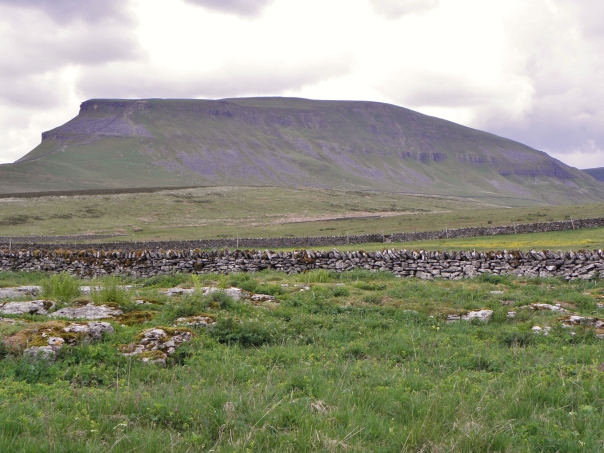 Pen-y-ghent is topped by a long plateau, running from north to south, which is reached by a satisfying-steep final climb. 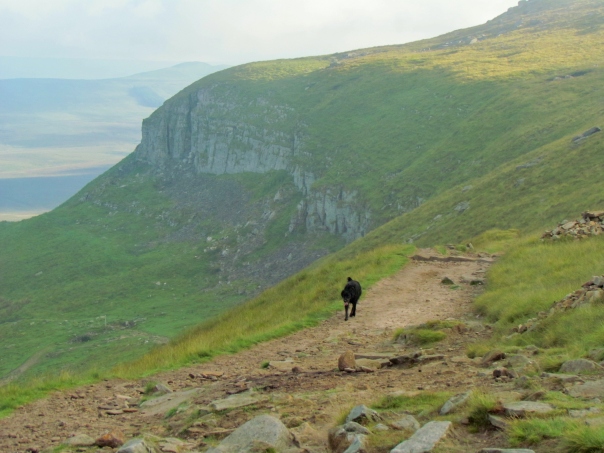 The distinctive shape of pen-y-ghent derives from the two thick horizontal layers of limestone, which have eroded more slowly than the sandstone layers between them.

These beds of limestone were formed from the fossilised remains of small crustaceans. These creatures lived in a warm shallow sea that covered Yorkshire around 340 million years ago (during the Carboniferous period). The climate cooled around 320 million years ago, and again around 300 million years ago. During these two periods of cooling, the sea retreated and the area became more delta-like, and flowing rivers brought the gritstone and sandstone which form the intermediate layers in the hill today. The summit of Pen-y-ghent consists mainly of gritstone.

The name of Pen-y-ghent probably derives from the Cambric language which was spoken in northern England and southern Scotland in the early Middle Ages, becoming extinct around the twelfth century. Pen means top, and ghent is thought to mean border. Thus Pen-y-ghent is the hill on the border. We do not know to what border this refers.

Pen-y-ghent lies about 2½ miles west of Horton-in-Ribblesdale, and is most frequently walked from there. There are two main routes from the village. The first is by leaving the village to the south and taking a minor road to Brackenbottom, from where a footpath ascends the eastern face of the hill.

This route is the shortest, and the one usually followed when walking the Three Peaks. The second route is to leave Horton-in-Ribblesdale via a lane from the in the centre of the village. This is the route of the Pennine Way, and approaches the hill from the north. 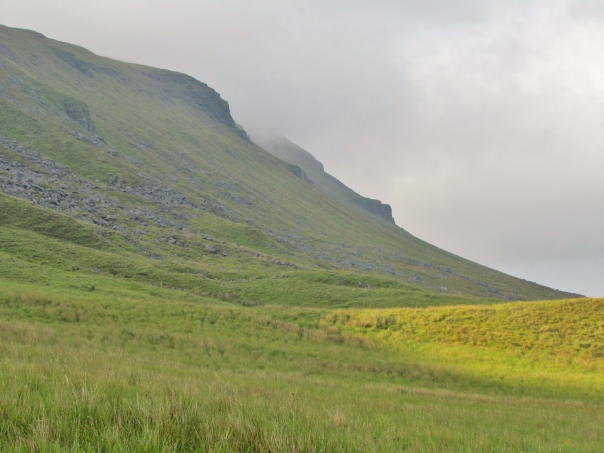 Combining the two routes above gives the possibility of an excellent six-mile circular route. A slightly longer circular route can be had by following the Pennine Way a little further to the south of the summit, as far as Churn Milk Hole. 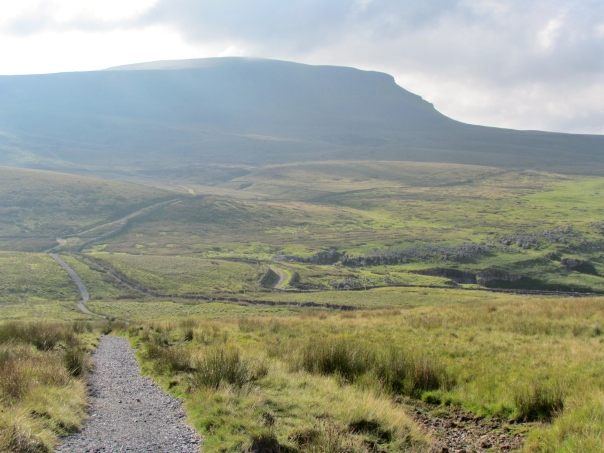